CERN, the European Organization for Nuclear Research, is probably best known as the birthplace of the world wide web, CERN being the then employer of Tim Berners-Lee, inventor of HTML, the markup language used to create web pages. Less known, at least outside Europe and physics nerd circles, is that CERN is also home to the world’s largest and most expensive (publicly known) machine, the LHC (large hadron collider).

After about a year lost due to a blowout of the superfluid liquid helium used to cool the 26.659 kilometer / 16.565 mile ring down to near absolute zero, the LHC is coming back online.

CERN is slowly building back up to full speed collisions of hadrons, typically either protons or lead ions. The 9,300 magnets and the vacuum in the ring, which CERN claims to be emptier and colder than inter-stellar space, enables two streams of particles to be accelerated to 99.9999991% of light speed and then slammed into each other.

At full speed, each of the two streams is equal to the kinetic energy of an aircraft carrier underway, so you can see why a breech in containment would be worthy of concern and a lengthy shutdown to ensure all the cords are plugged and lock washers tight.

CERN is celebrating it’s 50th anniversary on the 3rd and 4th of December, and they plan to be back up to limited power 450 giga-electron-volt collisions by then, nicely coinciding with the anniversary.

The first full power stream tests are scheduled for this coming Saturday, so if your lights dim you’ll know they exceeded the LHC’s normal 120 megawatt electrical load. If you are not familiar with megawatts, that’s about equal to a stack of car batteries a few miles high, or maybe it’s enough to circle the earth, I always forget to carry the one…

Once they get it up and running, the various experiments will produce about 15 petabytes (15 million gigabytes) a year of data. If you are not familiar with petabytes, that’s way more data than will fit on your keychain flash drive.

CERN is an interesting mix of the near mystical and the mundane. You’ve got to love a place that is getting close to recreating conditions near the big bang and offers such diverse seminars as:

And the guys there are not without humor. For instance, Sergio Bertolucci, Director for Research and Scientific Computing at CERN, said last week that the “Machine may possibly create or discover previously unimagined scientific phenomena, or ‘unknown unknowns’ – for instance ‘an extra dimension.’ Out of this door might come something, or we might send something through it.”

Dr Bertolucci later confirmed that yes indeed, there would be an “open door”, but that even with the power of the LHC at his disposal he would only be able to hold it open “a very tiny lapse of time, 10 -26 seconds (that’s 10 to the minus 26th power), [but] during that infinitesimal amount of time we would be able to peer into this open door, either by getting something out of it or sending something into it.

“Of course, after this tiny moment the door would again shut, bringing us back to our ‘normal’ four dimensional world … It would be a major leap in our vision of Nature, although of no practical use (for the time being, at least). And of course [there would be] no risk to the stability of our world.”

Ha! What a laugh. These guys are a hoot. Opening doors to other dimensions. Snort.

They are kidding, right?

Portal into the good stuff at CERN: http://www.lhcportal.com/ 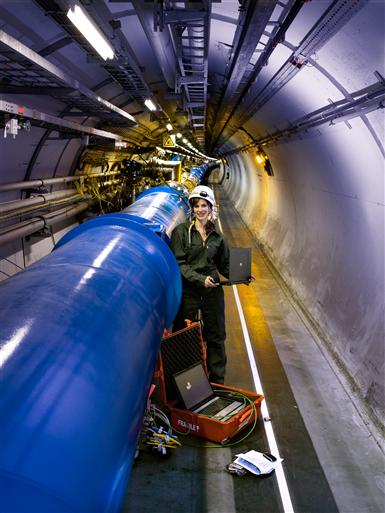 I swear this is the caption provided by CERN for this photo: Engineers checking the electronics of the cryogenic instrumentation under a dipole magnet.